We’ve all heard the phrase “stuff happens” or the other more colorful version of the phrase, which I won’t repeat on this blog.  In this phrase the “stuff” that happens to us in life is negative in nature and often deemed as an emergency or crisis. These emergencies almost always require some monetary outlay to ease or solve the situation. Now imagine if you had a cushion to lessen the impact of the “stuff” that life sends your way. If you had such a monetary cushion you would be able to take care of the “stuff” with little to no stress and it would be reduced from a disaster to perhaps just an irritation. Let’s look at two scenarios of how this could play out. 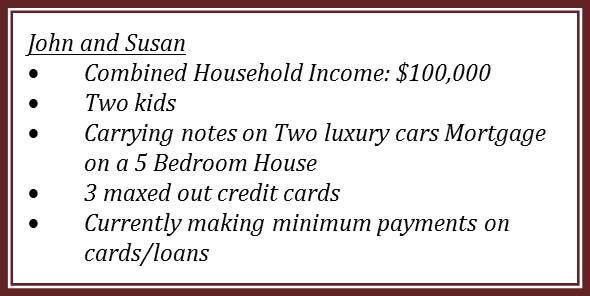 John and his wife, Susan, both work and they are making all the minimum payments each month on all their loans and credit cards. For all intents and purposes, they feel they are doing the right things and getting by in life just fine. Then, their son Timmy unfortunately took a baseball to the mouth at one of his games. They rush Timmy to the hospital and he requires stitches to fix a large cut and dental work to fix a chip to one of his front teeth. There are medical professionals to help Timmy, but the problem for John and Susan is that they have no savings to pay for the treatments that are estimated to cost $800. How will they take care of their son when they only have enough money to pay the minimum balance on all of their loans and the credit cards are maxed out? John and Susan are noticeably stressed, they are now arguing on a regular basis, and they are both having trouble sleeping as they’re trying to figure out what to do. They’ll likely need to sell something, take out a payday loan, or some other drastic measure to pay for this event.

Bob and Carol both work and they make all minimum monthly payments for their bills and manage to put an extra $100 per month to one of their credit card balances. They go along with life just fine. Then, in the dead of winter with two feet of snow on the ground, their home heater goes out. The repair technician indicates it will cost $800 to get it running. They have to have heat for the house, so they authorize the work and pay for it out of the $1,000 they had saved up in their emergency fund. The repair is completed and the family is happy and secure in their heated home again. They now take the $100 per month they were paying extra on the credit card and rebuild their emergency fund.

Does either one of these scenarios sound like your situation? Which one would you rather be like? Notice, both of these people have debts they are paying off, but Bob and Carol chose to have a small emergency fund set aside so their debt situation won’t get worse when the stuff of life happens.

Do you have the funds set aside to cover the “stuff” that happens in life? If you don’t have funds in place, the “stuff” that inevitably happens could compound into a catastrophic event. Stress levels are already high during an emergency, and now without funds to cover the emergency, your stress level pegs out to the maximum. Then you might not be able to sleep, you’re feeling ill, you are angry at your family/friends/co-workers and you’re a general joy to be around…not!

Unfortunately, statistics show that a majority of American’s couldn’t cover an unexpected expense of $1,000. The Associated Press-NORC Center for Public Affairs Research recently conducted a poll that asked households if they would have difficulty coming up with $1,000 to cover an unexpected bill.  The results?

Additionally, the Federal Reserve Board has conducted a survey to where they asked respondents how they would pay for a $400 emergency. The answer: 47% of respondents said that either they would cover the expense by borrowing money or selling something, or they would not be able to come up with the $400 at all.

Perhaps you have an emergency fund already.  If so, fantastic! But as the statistics show and as I’ve seen with many of my financial coaching clients, most people don’t have funds set aside for an emergency regardless of their income level. Why don’t people typically reserve funds for an emergency? I believe one reason is that they don’t really want to think about bad things happening to them. We always want to think the bad things will happen to the “other guy”.  And sadly, there will almost always be a time when you are the “other guy” and the “stuff” will happen to you.

While setting up an emergency fund doesn’t necessarily sound like fun, it is one of the easiest things you can do to help prevent financial stress in your life. In the next post, we’ll look more specifically at what an emergency fund is and isn’t and also how to set one up.

If you would like help taking control of the financial aspects of your life, please consider Aspelin Financial Coaching to help you be victorious with your money! Servicing clients in all 50 states via in-person meetings, video calls or phone consultations.