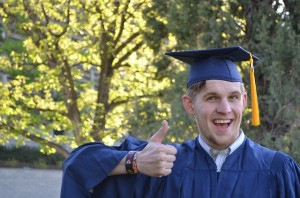 How do you feel about student loan debt? There are folks who think all debt is bad and do whatever they can to avoid it. That’s certainly a great way to do things, but that might not always be an option for some people.  Life is rarely black and white (at least that’s how mine has been), so let’s dive into this matter a bit more. So, the best option, is absolutely no debt, but if that option is not viable, lets look at whether you should take out a school loan and how you plan to pay it off. You can’t discharge student loan debt in bankruptcy, so you had better be 100% sure you can pay back the loan.

First let’s look at why you might take out a loan. I think I’ve mentioned the adage about only taking out a loan for something that will appreciate in value. So, if you lived by that motto, any consumer goods would be a definite “no” to get a loan for, vehicles would not be good for loans either, and homes would really be debatable if they are worthy of taking a loan out. But what about school tuition? Does the degree or certificate you get appreciate in value? Not exactly, but now that you (the student) have obtained that knowledge or skill, you will have a higher value in the job marketplace and you can command more compensation for your output. It’s a bit cliché but another way to look at a student loan is that it is an investment in you, and I think most of you would probably say that you are a good investment.

So, can you and your mind appreciate in value? I think we can safely argue that your earning potential could appreciate in value, but how does that happen? With a few exceptions, there is little doubt in my mind that advanced education (whether college or additional study or certification beyond high school) can result in a higher salary. The most recent Bureau of Labor Statistics (http://www.bls.gov/emp/ep_chart_001.htm) results on unemployment and earnings are pasted below for additional reference (sorry, I tried many ways but couldn’t get a larger, clearer image than if you look at their link directly).

This table shows pretty clearly that as a person’s education level increases, the unemployment rate decreases and the median salary increases. To some of you that may sound like common sense, but even if we think that is the way it should be, it’s often a good exercise to look at a large data study to see if that hunch plays out. And yes, there will always be exceptions to this data like the Bill Gates’ and Mark Zuckerbergs of this world who dropped out of college but are multi-billionaires. 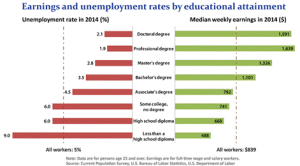 Those folks are super rare. And there will also be people who received a college degree but are horrible employees, so they don’t get compensated as well as others with degrees. The good thing about a data set as large as the one that the Department of Labor can pull from is that some of those anomalies will get smoothed out.

Based on this data, with a Bachelor’s degree, the median annual salary is $57,252 and with a high school diploma, the median annual salary is $34,736. That works out to be a difference of $22,516 per year in salary. So if you had the median amount of student debt for a graduate in 2015 (which is about $35,000 according to the chart below from the Wall Street Journal), you would easily have earned enough salary in 2 years to justify the added cost. Now you will likely not pay the loan back in two years, but the beauty of the education is that it is yours forever (and the rates and payback terms are generally pretty favorable). No fire and no thief can take that away from you and you will continue to earn at that higher level for the rest of your career (assuming you are a quality employee and there are no drastic downturns/layoffs in your field of choice).

All you cynics out there are probably saying, “but what if the student can’t get a job after college”, or “what if they get a low paying job and have no money left to pay off the loans”? 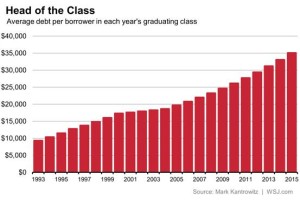 very legitimate concern, so you still have to be practical. If you are seeking to take out $100,000 of student debt for a degree at a high-end private liberal arts college to study art history, the job prospects might be scarce and the pay could be fairly low as well. But, if you are seeking a college loan for a degree at a state school to study Engineering (or some other S.T.E.M. pursuit), you are probably more likely to be able to get a job and also pay off your debt in a reasonable manner. Likely, $100,000 is too much debt for you and your career choice. Perhaps a lower cost college will allow you to still get a quality education and not be saddled with six-figure student debt immediately upon graduation. I’ll refrain from getting on my soap box for now about how ridiculous college tuition costs are inflating, but I likely won’t be able stay off it long since we are deep into saving for our son’s college as we speak.

When you start with higher earnings, you now get career/salary compounding to work in your favor. We do love compound interest here, right? So let’s say a person forgoes additional schooling or training after high school and starts making $25,000/year when they enter the workforce. If they get a 3% wage increase each year, after 20 years of working, their annual salary would be $45,153. That works out to a total increase of $20,153 (or 80% above the initial starting wage)

Now to look similarly at a new college graduate entering the workforce, let’s say that they start out making $40,000 after college and get the same 3% annual increases. After 20 years of working, their annual salary would be $72,244. That works out to a total increase of $32,244 (or 80% above the initial starting salary).

So, in our example, the rate of salary increase is the same with each (3%) and the time frame is the same, so the total percentage increase will be the same (80%). But as you’ve seen from the math, 80% of $40,000 is much better than 80% of $25,000, which means that when you can start out at a higher wage/salary, you get to enjoy the benefits of more compounding of your salary over your working career.

Is College the Only Way to Get a Higher Salary?

Absolutely not! College is certainly one very popular way of getting more education in hopes of commanding a higher salary, but it is by no way the only method to do it. As the table above shows, even with an associate’s degree (which could typically take 2 years), the wage differential is very real.

College is also not for everyone. There are many types of certificate programs that can get you on your way to a vocation you enjoy that can bring in a higher wage than simply having a high school diploma. The table from the Bureau of Labor Statistics above doesn’t really get into data if you have a certificate or attend trade school, but there are many great vocations that are available with such programs (e.g. cosmetology, HVAC, auto repair, process technology, etc.). And if you took out a loan to educate yourselves in one of those trades, you’d likely have a very similar payback rate as a college graduate (since the initial loan would likely be smaller for a trade school than a traditional college).

Or another option that has come on the scene lately is free online courses. Many colleges are offering top-level courses for free! That’s a pretty good price if you ask me. And yes, I can even think of times when you might not even need to go to college. Some people are great at starting a business and learning as they go. That can be a great education too. There will likely be some areas you are not amazing at, and for those, you will likely seek additional education, which could be obtained through some college or junior college courses when the time is right for you.

How did We Do It?

I was very fortunate to not have student debt when I graduated with my bachelor’s degree. Then for my master’s degree, my employer paid the bulk of it through tuition reimbursement. My wife did have just over $20,000 in debt in 1996 when we got married. At that time, that was well over the average amount for graduates, but we both had good jobs and we eventually paid if off early in about 4 years. Does she regret taking out that loan? Not at all. Not only did we meet at the same university, but it was a formative time in our lives and her career (and mine) both went very well and the $20,000 loan was absolutely worth it. It has paid huge dividends over her career and she’s not done yet!

So, to sum up, are you an asset that will appreciate? I sure hope so. Assuming you agree, then student loans may be a reasonable option for you (or your child) as long as you keep the total amount under control and match it to your job prospects.