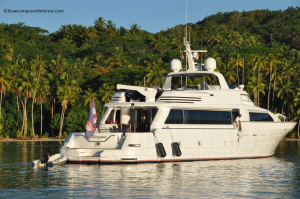 Well I’ve taken a bit of time off since my last blog post, since we were able to take an amazing trip that I mentioned a little bit about in a previous post. And now we are in the middle of listing our home for sale and trying to find a new home in another state (more to come on that later). Needless to say, there is a lot of action in our lives right now, but it’s exciting. My apologies for not getting this post of sooner. After quitting my job, I was supposed to have more time to blog, right? That time will come, but more important right now are some of the pressing family matters, which also was another reason I quit my job, so in the end I’m still doing what I set out to do…have more time to spend with and take care of my family.

Back to the trip. Bora Bora was incredible and virtually beyond description considering how awesome it was and the things we got to see and do. As I mentioned previously, we have some friends who have usage of a 116 ft private motor yacht that spends most of its time in Bora Bora. They asked us to join them for a week, so we did whatever we could to purchase airfare and get there, because you just don’t know when an opportunity like that might come around again (if ever). Now I’m a big advocate of frugality as evidenced from some of my past posts, but I’m also a fan of splurging sometimes too. This was one of those times where it was great that we had some non-emergency savings that we could use for a trip of a lifetime.

Our friends are very normal and not what I would put into the category of glittering rich. Don’t get me wrong, they work hard and the husband of the couple has a great and unique business that he puts a lot of time and effort into which has rewarded him for his hard work. But to meet them, they are totally normal people that dress normal, look normal, and are not at all pretentious. They are kind to others and of course they are very generous as well. They love to travel and enjoy fine food, which was an instant similarity we all had when we met about 4 years ago (on a vacation of course).

But beyond the great time we had with our friends and the amazing natural beauty we enjoyed, it also allowed us a unique glimpse into how the ultra-wealthy might live. Sure, we’ve had a special dinner before at a fancy restaurant before but this instance was definitely different. It was a week of being waited on and catered to in a way that I hadn’t been before, nor was I accustomed to. That was probably one of the main things my wife and I had to get used; allowing the crew of the yacht to wait on our every need. They were there simply to wait on us and make sure we had a great trip aboard the yacht. There were 4 crew and 4 guests during out stay. That’s a pretty good ratio to ensure that you get some really great service!

I consider myself pretty independent and I know my wife would say the same about herself as well, so when it comes to simple things like getting a bottle of water out of the fridge if I’m thirsty, to cleaning up after myself, to getting my own breakfast, it was all taken care of for us. It took a little getting used to for me and after a few days went by I realized that they just wanted to do their job and do it well, so I wasn’t upset that they kept asking me what I might like to drink or eat and instead I just started to request small things like water or some fruit juice to drink.

So what was really all that different from another “normal” vacation we might take when compared to this trip that the ultra-wealthy might take on a multi-million dollar yacht? I’d boil it down to service and access.

I’m really a do-it-yourself guy at heart. I cut my own grass, I do almost all my own home repairs/ upgrades, I do my own taxes and my wife even cooks dinner at home every night. You get the point. My first inclination if I want something or want to do something is to get it or do it myself. If I’m thirsty, I walk to the fridge and get some water or another beverage. If I’m hungry I head to the pantry or the fridge. Even though my wife or my son may be in the same room with me, I rarely would ask them to get these things for me. This situation doesn’t necessarily apply though when you are on a yacht. Essentially anything you want will be brought to you. The crew was super polite, but they would regularly ask us if we needed anything to drink for example. At first I just politely declined but then I guess I got worn down and I just regularly started asking for water. I do drink a lot of water, so it worked out well I guess and the staff felt like they were doing their job. It just took some adjusting for me to be waited on that diligently.

At our home, we do not have a cleaning service or maid, so we will clean up after ourselves and keep our bedrooms, kitchen and bathrooms tidy. In somewhat the same way as a hotel, the yacht crew took care of cleaning and tidying everything. We would chuckle a bit because while we were up on deck eating breakfast, one of the crew was already down making our bed and freshening up our bathroom as well. This would happen 2-3 more times during the day and evening, all the way up to the turn-down service and the proverbial chocolate on the pillow. 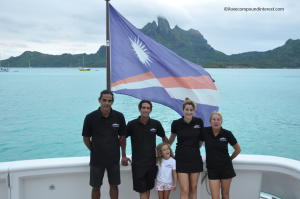 And probably the most amazing service that we did in fact warm up to quickly was having a private chef on board who would cook you pretty much anything you wanted. This really played out at breakfast. There were different fresh fruit each morning followed by “what can I get you for breakfast?” It wasn’t, “we’re having croissants and jam”, we could have whatever we liked and Doris (the chef) would cook it up. She also cooked some amazing lunches and dinners while we were on board. Basically we had a 5 star chef on board that was at our beck and call. She even had relationships with the chefs at some of the fancy resorts and they would let here come to their kitchens and teach here some of their signature dishes, which she would then in turn cook for us. Having a chef was indeed a perk of the ultra-wealthy that I think we could get quickly spoiled on!

Since the yacht had a 27 foot tender (a smaller boat that you can quickly go places in while the yacht is anchored), we also had easy access to go anywhere we might like. We finished lunch one day and our hosts suggested we go snorkeling…done. We want to run into town to shop for a souvenir for our son…done. We want to go to a popular bar for one of their famous Pina Coladas…done. We essentially had the water equivalent of a chauffer the entire trip. Since Bora Bora has very few roads and most resorts are on small outer islands (called motu), most people just stay at the resort or hire a snorkel boat to take them to a popular snorkel spot, but basically they stay put at a resort and enjoy their vacation that way. 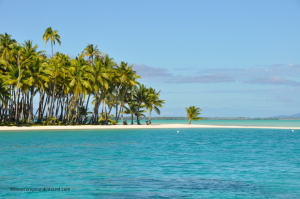 The captain (and often his mate) would take us snorkeling virtually everyday (sometimes twice) to all the best spots around the island and lagoons. Since they stay on the yacht in Bora Bora when guests are not on board, they get to know all the best spots to snorkel, all the best restaurants (fancy or local hang-outs), and they get to know many of the restaurant owners as well. Since they knew all the chefs and restaurant owners on the island, the few dinners we had off the yacht were booked by the crew and we would always get the best tables and often a personal greeting from the chef upon arrival. Just another benefit of having access to the finest things that the ultra-wealthy can quickly get. Having access to a personal chauffer and concierge service was another nice perk that the wealthy can enjoy to the fullest when they have staff for them on the yacht.

While there are definitely perks of living like the ultra-wealthy, there can also be pitfalls as well. Unfortunately it is all too common in the USA to act like you are wealthy by driving the fanciest cars, or living in the fanciest house, while wearing the fanciest designer clothes when in reality that person might be in debt up to their eyeballs, only one missed paycheck away from it all crumbling. I pray that is not you, but I only say that to mention that there can be a tendency in the US to “think” or “act” like we are rich or wealthy and live the lifestyle like we are to somehow show others that we have achieved a certain level of status or that we are better than them. Shame on us if we act this way, but I only mention this because it is kind of easy to think you are something special when you step off of a large yacht and people are staring at you like you are someone famous. We had to really resist the temptation to think to ourselves, “look at me, that’s right, I’m getting off this huge yacht; I’m awesome”.

Another pitfall that I understand some ultra-wealthy can fall into is talking down or treating others in lesser positions as somehow lower than themselves. Our hosts were certainly not like this and their partner/owner of the yacht (from stories they tell) is also not like this, but it can be something to guard against should you find yourself in such a situation. Of course people of all socio-economic levels can unfortunately fall into this practice, but there is a certain stereotype of the wealthy that my wife and I are aware of. In fact we may be a bit unusual in that we actually make it a point to engage and learn a bit more about the folks we meet and are serving us. Since I’m generally an early riser, it was nice to sit and chat with various ones on the crew to hear their story. They’ve seen and done some amazing things!

Well, that’s probably enough for now and it goes without saying that if you get an opportunity to join friends on a huge yacht, whether in Bora Bora or anywhere else, you should take advantage of the opportunity!