Happy 2016 to all the readers of ilovecompoundinterest.com!! As 2015 comes to a close and we start another new year, I’m doing what I promised at the 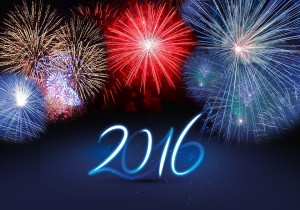 beginning of 2015 and I’m sharing a yearly wrap-up and annual investment review of the past year and share some goals and relevant investment limits that might be changing for 2016.

At the end of every year, I do my annual net worth calculation. I have a large Excel table that I created and update all the investment totals at the end of the year as well as check in on any liabilities (like mortgage) to come up with the yearly net worth. Equally important, I look at my asset allocation at the end of the year to determine if the percentages work out the way I want or if I need to do some rebalancing or redirect some of my new investing dollars into other assets that will help achieve the blend I’m seeking. I also track the amount we save, earn, and give each year, and then I project future earnings for my portfolio to see that our retirement and our son’s college savings are on track.

I’m kind of addicted to this table, because I love to know where we stand in relation to our ultimate goals and run countless scenarios to see how quickly we could attain our goals. Even with the mostly stagnant stock market, this year was another good year for our family with regard to our finances.  It’s an understatement to say that we had a lot of changes (me retiring early and quitting my job, us moving to Ohio, etc.), but in the end, we were still able to save quite a bit and even reduce the price of the home we’re living in by 35% when we moved. We had marginal gains in our investments (4% over the year) which I’m not complaining about at all. It sure beats the massive drop all my accounts took in 2008! We were able to set aside and save the largest amount that we have done thus far in one calendar year (mainly due to the sale of our home in Texas) which helped bump our net worth up 7% over last year.

I’ve talked several times about saving all you can (20%+) and about charitable giving, so in order to practice what I preach, I figured I should be transparent and share how we did as reflected as a percent of income. I’ve also included the change in net worth from last year. Please don’t interpret this as bragging, rather it is just to show you that a regular family can save, give, and earn a large amount and still be able to achieve our goal of financial freedom. Although he is more theologian than financial planner, I think the quote by John Wesley says it best, “Earn all you can, give all you can, save all you can”.

I track every expense we have (which should be no surprise to anyone), so it’s also a great exercise to look at the overall spending at the end of the year rather than just the normal month-to-month budgetary view. First of all, with a cross-country relocation, budgeting was a bit of challenge this year, but we made it through quite well. As far as spending focuses for the year, I had targeted our clothing/shoes budget as one that we wanted to reduce in 2015. I was doing exceptionally well and had spent less than $50 through July. Late summer we found out we were moving to Ohio which necessitated purchasing ahead for some winter clothes (which we had very few of living in Houston, TX most of our lives). My wife and son didn’t quite share my fervor on this clothing budget up to the move, but they did do quite well overall. In the end, even with new winter wardrobe purchasing, we were able to reduce our clothing/shoes spending by 60% for the year!

Here were some other notable reductions for the year over the 2014 spending:

Here were a couple of increased areas of spending for the year:

It’s great to look back and see what successes or disappointments we might have had, but we also want to look forward to the next year. I’m not one to make resolutions, but I have made commitments that I’ve stuck to during the year which led to consistent changes in my life. Maybe it’s just semantics, but I prefer “commitments” over the hype of “resolutions”. If you haven’t made a commitment yet to save, that is by far the most important commitment to make that will get you on the road to financial freedom (assuming you have paid off any consumer debt already). Take some of the savings suggestions that are in the Cost Savings Series on the blog and start small if need be, but steadily increase until you can even get to 20% of your income that you save and invest. We are living proof that this can add up over the years and propel you toward financial freedom.

Here is where I have typically talked about the new saving limits for the various plans (IRA, 401(k), etc.) for the coming year, but they have actually all stayed the same for 2016. Not a big deal, but the major thing that I keep harping on is to save, save, save!

For me and my family in 2016, we’re going to continue to focus on our on saving. It’s going to be a bit trickier this year though since our income will be much less than in the recent past. We’re not worried though. This is all part of our plan and the benefits of having some schedule freedom and more time with our son has been well worth it so far. Also in 2016 I’m going to get some training on Financial Coaching and seek to get a solo practice for financial coaching up and running to start fulfilling my overall goal of doing some meaningful work that I enjoy that also allows me time to spend with my family. Should be an exciting year!

Happy 2016 and Happy Compounding of Your Interest!