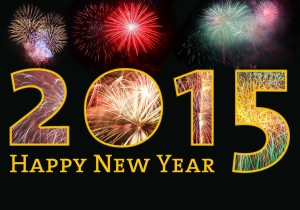 Happy 2015 to all the readers of ilovecompoundinterest.com!! As 2014 comes to a close and we embark on another new year, I’m going to make it a habit to share a yearly wrap-up and annual investment review of the past year and share any new investment limits that might be changing for 2015.

At the end of every year, I do my annual net worth calculation. I have a large Excel table that I created and update all the investment totals at the end of the year as well as check in on any liabilities (like mortgage) to come up with the yearly net worth. Equally important, I look at my asset allocation at the end of the year to determine if the percentages work out the way I want or if I need to do some rebalancing or redirect some of my new investing dollars into other assets that will help achieve the blend I’m seeking. I also track the amount we save, earn, and give each year, and then I project future earnings for my portfolio to see that our retirement and our son’s college savings are on track.

I’m kind of addicted to this table, because I love to know where we stand in relation to our ultimate goals and run countless scenarios to see how quickly we could attain our goals. Fortunately, this year was another good year for our family with regard to our finances. We had decent gains in our investments and we were able to set aside and save the largest amount that we have done thus far in one calendar year.

I’ve talked several times about saving all you can (20%+) and about charitable giving, so in order to practice what I preach, I figured I should be transparent and share how we did as reflected as a percent of income. I’ve also included the change in net worth from last year. Please don’t interpret this as bragging, rather it is just to show you that a regular family can save, give, and earn a large amount to able to achieve our goal of financial freedom. Although he is more theologian than financial planner, I think the quote by John Wesley says it best, “Earn all you can, give all you can, save all you can”.

It’s great to look back and see what successes or disappointments we might have had, but we also want to look forward to the next year. I’m not one to make resolutions, but I have made commitments that I’ve stuck to during the year which led to consistent changes in my life. Maybe it’s just semantics, but I prefer “commitments” over the hype of “resolutions”. If you haven’t made a commitment yet to save, that is by far the most important commitment to make that will get you on the road to financial freedom. Take some of the savings suggestions that are in the COST SAVINGS SERIES on the blog and start small if need be, but steadily increase until you can even get to 20% of your income that you save and invest. We are living proof that this can add up over the years and propel you toward financial freedom.

Let’s take a look at any changes to the legal amounts that we can invest this next year in some of the most popular savings vehicles available to Americans.

IRA (Individual Retirement Arrangement) investment limits remain the same for 2015 at $5,500 per year per person as well as $1,000 per year for catch up contributions for those 50 and over. The income limits for deductions with a Traditional IRA or eligibility for a Roth IRA have also increased slightly for 2015, but it’s a bit more detail for this particular blog post. I’ll be creating a comprehensive IRA post in the future, but in the meantime, feel free to check out this quick reference web page of the IRS which details the changes for 2015 on these most popular plans as well as any changes on the somewhat less common retirement plans available to some. http://www.irs.gov/uac/Newsroom/IRS-Announces-2015-Pension-Plan-Limitations;-Taxpayers-May-Contribute-up-to-$18,000-to-their-401(k)-plans-in-2015

I haven’t spoken too much yet about HSA’s but definitely expect more in the future, because it is safe to say that these are AWESOME! I was vaguely aware of them a few years ago, but never eligible for one due to health coverages we had, so I’ll confess that I never really dug in too much to learn about them. Shame on me, because now we are on a high deductible plan that allows investment into an HSA and I’m learning just how amazing these plans are. For 2015, the limits are the same as 2014 which is $3,350 for individuals, and $6,650 for couples with another $1000 per year allowed if over 55 years old.

Happy 2015 and Happy Compounding of Your Interest!